What's round, green, and fried all over? 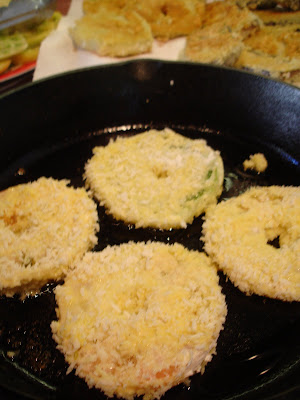 Fried Green Tomatoes, that's what! These are SO worth the time to make. We had some friends over who had never tried them so it was a good reason to make them. I also made some fried eggplant according to this recipe and even though I don't really like eggplant the little ones at the market were so cute that I thought, what the heck? I was in a bit of a fluster trying to get everything together before our guests arrived so my picture quality kind of paid the price. But don't let that discourage you! The next time you're at your farmers market or someplace that carries them pick up a couple and try this recipe: 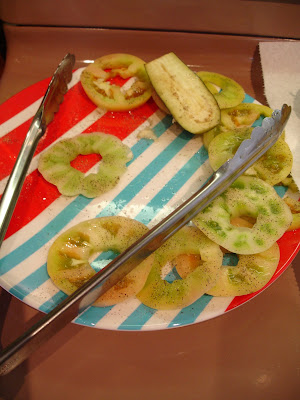 Cut the tomatoes into 1/4" - 1/2" slices. Sprinkle with salt and pepper and let them sit for about 15 minutes or so. Heat the olive oil in the skillet.

Okay, so here's where you really have to follow the directions. I tried to mix up the dipping order once and even omitted an ingredient and the tomatoes did not fry up as well. So take it from me. Place milk, flour, eggs, and breadcrumbs in separate bowls and dip the tomato slices in that order; milk, flour, eggs, then breadcrumbs. For real. 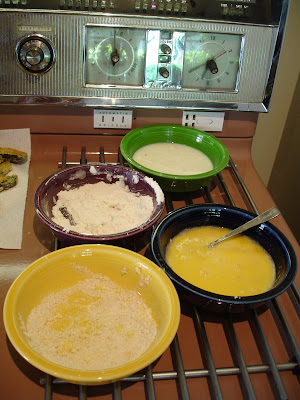 Then you put 3 - 4 slices in the hot skillet and fry them on each side until golden brown. I've found that as I fry more than two batches I have to replenish the milk, flour, eggs, and breadcrumbs so just keep a little extra handy. And I add more olive oil for each new batch because it seems to just disappear. 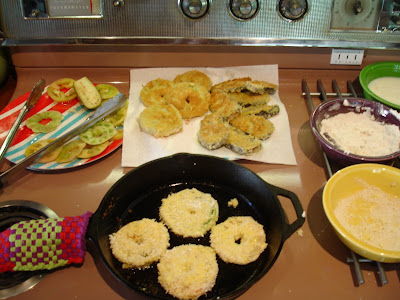 And that's it! Hopefully your fried green tomatoes will look a little like this but even if they don't just make sure you have cornbread, beans, and cold beer with lemon to go with it and it won't matter so much! 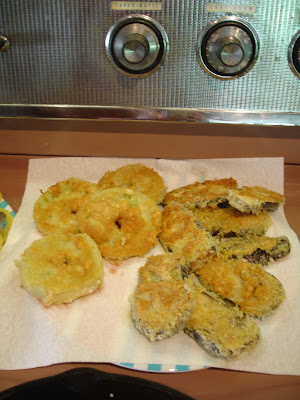 I always make enough so that we have leftovers for the next morning's breakfast with eggs and if there's any left, cornbread too. Beer is optional.

Hope you decide to try them - enjoy!
Posted by tinyparticlesoflight at 6:00 AM