I noticed a misalignment in our son Liam's eyes at just five months old. We've been to four specialists since that time and have tried eye patch therapy as well as glasses but nothing was working. Surgery was the last resort but necessary as the problem would never get better on it's own. We decided to have it done now at age 2 while he was still fairly young and oblivious to the scary term,"surgery."
So off to UCLA we went... 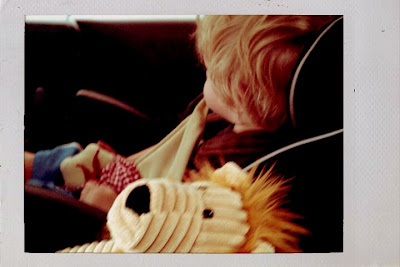 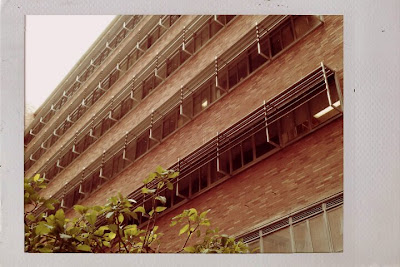 Liam was a total cool dude about the whole thing. No crying or complaining the whole trip down. Still not much complaining as I dressed him in the vintage looking clown and elephant hospital p.j.'s. His dad even got him to laugh. I sat with him on my lap as the surgeon, an intern, two nurses, and the nicest anesthesiologist in the world went over every detail of what would happen and how one of us could actually go into the operating room with Liam while they started sedation. G was awesome enough to
let me be the one to go. 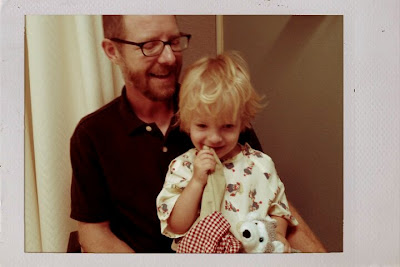 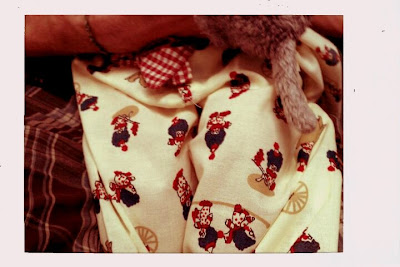 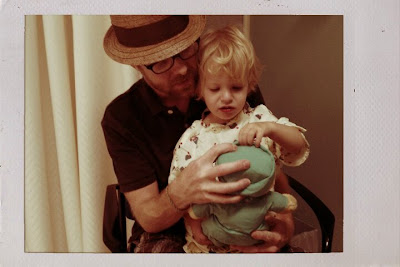 Dressed in full scrubs, Liam and I walked down the hallway to the operating room. He sat on the table as the doctor administered the anesthesia through a mask and told him a story about the three bears. He was out in less than a minute and with a quick kiss I left the room without breaking down. Not even a tear. I was feeling pretty cool and tough about it all. We even had a nice breakfast in the cafeteria
with G's parents while we waited. 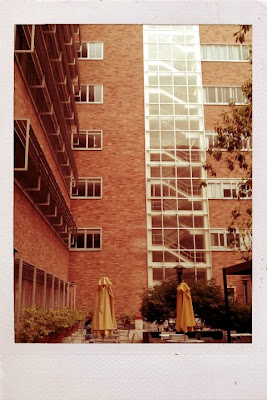 An hour and half later G and I were called into recovery where Liam was just waking up and when he saw us he started crying. Bloody tears. He was still hooked up so the nurse situated him on my lap as he continued to cry and say "mama, owie". The surgeon came in to explain the recovery process and as he went on talking I started to feel really hot, nauseous, dizzy, and as I passed Liam hurriedly to the doctor I promptly passed out a few steps away.
As my family knows, this is not news. Every time I get blood drawn I have to be lying down or else. But this was the first time I'd fainted on someone else's behalf. The nurse who came to check on me later said only half joking, "nursing is not your calling." For real, lady. For real.
Oh yeah, and the staff had called their 911 unit so four cute dudes showed up to check my vitals and my hair looked super crazy from the damp washcloth not to mention the fact that I felt completely ridiculous. But our boy Liam on the other hand was strong and brave through it all (even if his mother wasn't) and he watched DVDs the whole way home in the car. The first thing he wanted to do when he got home was play with his new toy motorcycle.
Things are already getting back to normal.

Posted by tinyparticlesoflight at 6:00 AM